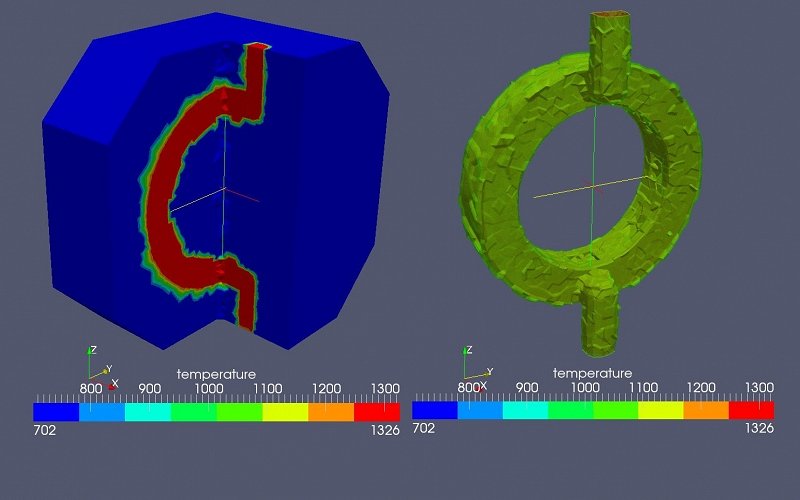 IMR is an Italian SME which has achieved world leadership in the design and manufacture of foundry equipment for brass alloys and bronze. The company also offers its customers dedicated consulting services for the design of moulds and other manufacturing processes. The use of HPC-based simulation reduces the number of changes to the mould prototype during its design. Simulation using HPC saves 20% of the cost of testing and three weeks of development time, before mass production can begin.

Founded in 1959, IMR is an SME which designs and manufactures foundry equipment for brass alloys and bronze. The company also offers its customers dedicated consulting services for the design of moulds and other manufacturing processes. In 80% of cases, IMR's equipment is used for the production of taps and valves and 20% for other high-performance artefacts. The moulds mounted on the installation are filled by injecting the liquid metal at temperatures of about 1,000°C. The inside of the moulds for casting comprises preformed cores in sand.
The success of the entire process depends on the quality of the piece obtained. Therefore, it is essential to design the moulds and the casting channels so as to obtain a laminar flow of the liquid metal and a constant cooling gradient throughout the final piece in order to avoid cracks and defects. Currently, the design of moulds and filling channels depends on the experience of mould makers in collaboration with experts from the foundry. Generally, the exchange of experience produces good results, but often it is necessary to modify the mould several times and repeat tests before committing to production.
There are several commercial packages for the simulation of casting processes. However, apart from very recent industrial results on some specific copper alloys, simulation has not been widely used in this sector.

In the past, IMR has tried to conduct simulations with commercial software, but never with HPC. However, it wanted to investigate how these could improve the time to market and productivity. There were no success stories reported for such simulations in this sector. Furthermore the costs of dedicated casting software and the necessary hardware and the training required for its use are excessive for a SME like IMR whose normal activities do not require such an investment. The challenge of this case study was therefore to demonstrate the benefits of HPC-based simulation to IMR.

A computer model to simulate the flow of copper alloys was developed based on an open-source software package. This model produces a reliable simulation of the filling of a mould by the molten copper alloy at low pressure. It keeps track of both the filling velocity and the thermal exchange between the mould and liquid metal. The simulation results have been validated by comparison with physical tests. Running the simulation on a desktop system took an unacceptably long time of over a day, which is not consistent with an efficient design process. Using a Cloud-based HPC system, the time for a simulation could be reduced to 3 hours, which is an acceptable time frame. Before this case study IMR had only used limited simulations. This case study was their first experience of advanced simulation using an HPC Cloud.

The use of HPC-based simulation reduces the number of changes to the mould prototype during its design. The simulation using HPC reduces by 20% the time for development of the mould and saves 20% of the cost of testing, before mass production can begin.
The average cost for the design and testing of a set of moulds for a new product based on the traditional, empirical method, is currently about €41,000. The use of a Cloud-based HPC simulation, including all costs, such as set-up times and computing costs, saves about € 8,000 per set and 3 weeks of testing and modifications. IMR has about 8 sets of moulds per year to develop, so this represents a total annual saving of €64,000, not taking into account the benefits of a shorter time to market. Furthermore these simulations create the opportunity for IMR to offer its customers a new, HPC-based design service.

The challenge of this case study was therefore to demonstrate the benefits of simulation, in order to support the business decisions of the SME.

A computer model to simulate the flow of copper alloys was developed based on an open-source software package. This model produces a reliable simulation, in a simple geometry, of the filling of a mould by the molten copper alloy at low pressure that keeps track of both the filling velocity and the thermal exchange between the mould and liquid metal.